East Kerry GAA and Kerry County Committee, extend sympathy, on the sad passing away of Pat Delaney, our GAA colleague and Officer, to his wife Bridget, family and friends.

Pat, a native of Kilkenny, was involved in hurling in the District and County from when he arrived in Killarney in 1983. His 22nd year on the Board, at the time of his passing away he was Assistant Treasurer of East Kerry GAA and Vice President of his beloved St Pat’s East Kerry Hurling club.

Since the diagnosis of his illness, which he bore with fortitude, Pat continued to be actively involved in East Kerry GAA matters, serving on the East Kerry executive. 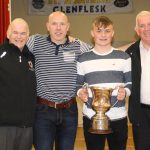 He was very proud of the East Kerry Minor teams victories, of  the resurgence of his native Kilkenny Hurling team and the success of the South Kerry U14 team in qualifying to represent Kerry in this years Feile na nGaeil

Pat served as Kerry Minor and Senior Hurling Selector from 1995 to 2000, Chairman of South Kerry Hurling Board 1994 to 2014 during which time he served on the Kerry County CCC.

Parallel with his East Kerry roles of Hurling Officer, Treasurer and Assistant Treasurer, he devoted huge time promoting hurling, to his club St Pats, to South Kerry Hurling Board and at County levels.

In January 2018 , the East Kerry GAA Board were delighted to present Pat with a special award in recognition of outstanding and long service over 22 years (1996 to date) to the Board and exceptional service to Hurling in the District and County from 1983 to 2014. 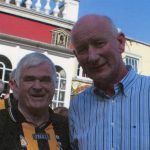 A gentleman to his fingertips, staunch Kilkenny Hurling supporter, his passion and love of the small ball is reflected in his long commitment and drive to promote hurling in East Kerry and beyond over the past 30 years. He will be sorely missed

The East Kerry GAA Board were delighted to present Pat Delaney with a special award in recognition of outstanding and long service over 22 years (1996 to date) to the Board and exceptional service to Hurling in the District and County from 1983 to 2014.

Proud Hurling man Pats inolvement in G.A.A. began long before he departed his native Kilkenny with his club Emeralds as a player and where he served as club secretary. When he moved to Killarney in 1983 in his role with Irish Life Assurance he met up with his fellow Emeralds man Tom Holohan, a founder member of St Pats East Kerry Hurling Club. This set Pat on a journey across the decades where he became entrenched in hurling in the District, recruiting and motivating players , sourcing finances, , keeping St Pats to the fore at Divisional and County level. His passion and love for the small ball is reflected in his committment and long lasting drive to progress and promote hurling over the past 30 years in East Kerry and beyond.

Pat became involved in the club administration in 1986 when in he succeeded Jackie Quirke as Vice Chairman. For his leadership, Pat was awarded St Pats Hurling Clubman of the Year 1991. 2 years later, Pat became the clubs second Chairman and held that position for 18 years, during which he was delighted to see the club win County Junior championships in 2007, 2010, 2013 and 2014. Pat also took a role in team managament, in 1998, where he joined Mike Leahy and Denis Russell as St Pats Hurling Senior team management.

Pats service on the East Kerry Committee began in 1996 when he was elected as East Kerry Hurling Officer, a position he held with distinction for 14 years, until 2011. Parallell with the role, Pat devoted huge time and energy promoting Hurling through involvement at club level (St Pats East Kerry Hurling Club), Regional (South Kerry Hurling Board) and County levels.

In 2011 Pat moved from Hurling Officer and succeeded Andy OSullivan as East Kerry GAA Board Treasurer, a role he fulfilled conscientiously and to the highest level for the now maximum allowed period of  5 years. Pat continues to serve the Board currently being Assistant Treasurer for 2016 and 2017.  Pat has the distinction of serving the Board under four East Kerry Chairmen: Pat Sweeney, Ger Galvin, Dermot Griffin and Tim Ryan.

His contacts in the financial world and high level of financial expertise were put to good use for the benefit of the club and in latter years the East Kerry Board. With his sense of humour never far away, Pat was never shy about congratulating his native Kilkenny on yet another historic All Ireland Hurling title at delegate meetings and in his annual reports.

During his time as East Kerry Hurling officer Pats many qualities and extensive experience saw him elected Chairman of South Kerry Hurling Board in 1994. He held the position until 2014, during which he served as a member of the Kerry County Board C.C.C.  Pat was  appointed as a Kerry Minor and Senior hurling selector, from 1995 to 2000. An interesting snippett, in Pats first year as selector,  Kerry defeated All Ireland champions Clare in round 1 of the league in Tralee. Pat got great sport from that victory as one of his lifelong friends, Tony Considine, played with and managed Clare. During his terms as selector for Kerry teams Pat enjoyed working  with managers Mike OHalloran, John Myler, Eugene OSullivan and PJ OGrady Adare.

Pat is married to Brigid. Their family is Philip, Mick, Pat, Mary and Edward. Pat takes great pride in his many grandchildren (Dylan, Clodagh, Brook, Lea, Abby, Holly and Rian Patrick) some of whom are juvenile hurlers in Limerick.

Pat is a gentleman to his fingertips with a deep interest and commitment to East Kerry GAA. It is most fitting to mark 38 years of Hurling promotion in East Kerry and 21 years of outstanding involvement with East Kerry GAA Board.