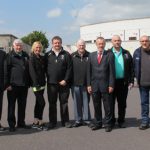 Many thanks to everyone who helped with the successful Killarney Parade, marking 50 years of County Coiste na nOg – on Sunday 7th May 2017. A Special word of thanks to all the young people who marched in the Parade and did their clubs proud.

East Kerry Chairman Tim Ryan thanked Fitzgerald Stadium Committee, Niall O’Callaghan,  the Stewards, The Gardai, Nially O’Sullivan and everyone who helped in so many ways. He welcomed County Assistant Secretary Stephen OSullivan and all themembers of the County Coiste na ng who participated in the gathering to mark the auspicious occasion fo the 50th Anniversary of the founding of County Coiste na nOg. Tim reflected on the many from East Kerry who served on County Coiste na ng being