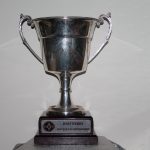 The Bill Tangney Cup was presented to East Kerry Board in 1993 to honour Listry player and clubman Bill Tangney. In the early years, Bill a fine footballer and formidable opponent on the field of play, played his football in the local field, known as ‘Tangney’s Field’ in Faha. He passed away in 1993 aged 62, predeceased by his wife Eileen Cahill (Cleeny, Killarney) in 1988. He is survived by his children, Padraig, Mary, Sean and Breda. Gneeveguilla CLG were the first winners of the Cup in 1993. Since 2013 the Bill Tangney Cup is competed for by clubs that lose their first game in the East Kerry Junior Championship.

‘Bill Tangney was Born in 1931 to Patrick and Mary Agnes Tangney at Rosnacartan More, Faha, Killarney, Co. Kerry.  He lived on the Family Farm with his parents and Siblings, Eileen, Paddy, Noreen and Michael.   Bill and Paddy both played Football in the early years in the local field, known as ‘Tangney’s Field’ in Faha.  He was a fine football player… and played his Football with Listry … was a formidable player on the field of play.

Bill attended Faha National School. Having completed his Primary School Education he took up an apprenticeship and went on to work in the building trade.   Bill passed away in 1993 aged 62, his wife Eileen Cahill (Cleeny, Killarney) having predeceased him in 1988. He is survived by his children, Padraig, Mary, Sean and Breda.

Note: Based on available information

Currow V Gneeveguilla – Did not go ahead